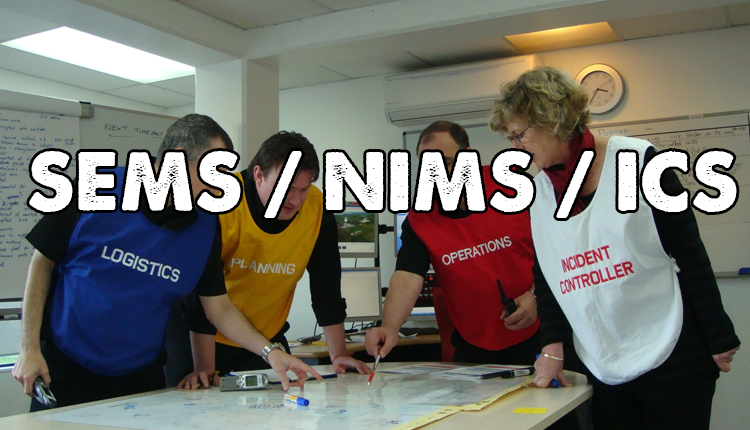 If you are a part of your school’s Emergency Response Team, you probably know that you have to comply with SEMS and NIMS.

But for a lot of folks these systems may sound confusing and overwhelming. So in this post, I will simplify SEMS and NIMS for you, how it all started and how it can really make a difference in your success in responding to a mass casualty incident.

Check out our School Earthquake Preparedness Guide and Checklist, I've put together all the important things that matter to a school and help you to create a real world plan and response to an emergency.

What is SEMS? What is NIMS and what’s the difference?

The Standardized Emergency Management System (SEMS) is California’s emergency response system. It began in 1993, due to the state’s frequent hazard threats (earthquake,  floods, wildfires), so the state came up with this standard structure in order to smoothly respond to an emergency.

The National Incident Management System (NIMS) is basically the same with SEMS but it’s nationwide. The country took SEMS and made it the national protocol.

Watch this video to give you a glimpse of the history of SEMS and NIMS.

When the people in the field think or assume that they are going to receive help and  resources from above, and those above don’t really know exactly what the people are expecting – that’s a disaster.

So this is where SEMS comes in.

It’s very systematic when you began to understand it. It unifies all elements of your emergency management community into a single integrated system and standardizes key elements.

What do I mean by that? 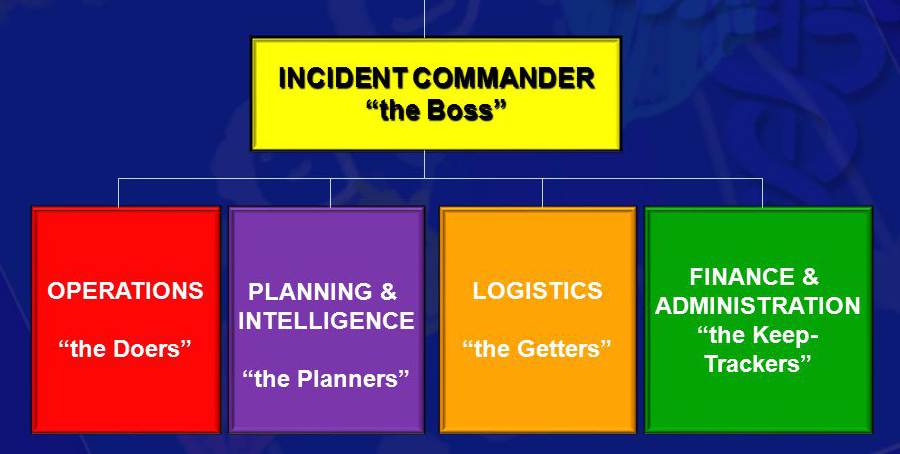 See the image at the top?

This is a flow chart of how the system works.

Let’s start with the 4 groups at the middle.

Operations are “The Doers”. They are the people in the field, you – if you are a part of your school’s emergency response team.

In order to have an organized operation, you need a plan. Where do you evacuate the students? What do you do about the injured kids? How do you rescue trapped victims? What are the skills that you need? How do parents pick up their kids? These are just some of the basic questions on how you are going to respond in a mass casualty disaster. So this is where the next group is needed.

Planning or “The Planners”. They create the plan that the operations can execute and it has to be realistic.

You can’t create a plan where there are 18 helicopters that will pick up the kids. That’s not realistic.

So they have to work with the Logistics to come up with the list of supplies that the Operations will use in the field.

Logistics or “The Getters”. They will get the supplies, but they have to work with the Finance group to make sure that the cost is within the budget.

Finance or “The Payers”. They track the money side of everything.

So now, all of a sudden, all these 4 elements are working together to create a realistic emergency response plan and the Incident Commander or “The Boss” is guiding the group.

Who should be the Incident Commander?

Normally, it’s the Principal at the school site or the Superintendent at the district level, but it can be anyone who may have more emergency management experience. If you are in charge of your disaster response plan, then I recommend  you start with our Disaster Preparedness Calculator for Schools. It follows the latest protocols for emergency response. It covers how to structure your emergency teams and what exact supplies they need to carry out the plan.

Where does the Search & Rescue and First Aid Team fall in SEMS/NIMS?

I’m the Risk Manager of our School District, do we need a separate Incident Commander and structure at each school?

Do you have more questions?

Leave your comments here or email us at wayne@disastersurvivalskills.com