For years the experts told us to get into a doorway during an earthquake for protection. I believe it was in California where the the doorway myth began. With the first settlements in California being spanish missions. These adobe buildings were made of earth and straw. Earthquakes in the 1800’s caused substantial damage to the adobe missions. The door frames made from heavy timbers were usually still standing. But in modern times the doorway is usually the weakest part of a structure, not the strongest. This is because some of the framing members (studs) have been removed to accommodate an opening.  This break in the integrity of the wall creates the weak link.

Another reason why a doorway isn’t safe during an earthquake is because standing in a door frame leaves you extremely exposed. You are exposed to imploding plate glass from windows and other flying or falling debris when the strong shaking starts. Your face is exposed along with all your vital organs completely unprotected.

Never stand in a doorway if you are in a public building, you could become a victim of a human stampede, because most people will panic and attempt to run outside. Of course, don’t try to follow the herd, DO NOT RUN! In a strong earthquake you will be thrown to the ground if you attempt to run. Instead find the closest cover. 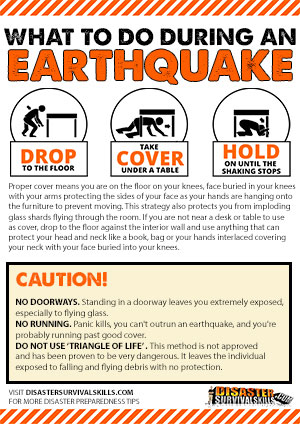 I created this drop, cover, and hold on poster that you can download and print out to share with your family and friends and workplace. Help inform them of what they should do during an earthquake.